Grapes were planted in Sonoma County at Fort Ross as early as 1812. Padre Jose Altimira planted several thousand grape vines at Mission San Francisco Solano in what is now the city of Sonoma, in southern Sonoma County. Cuttings from the Sonoma mission vineyards were carried throughout the northern California area to start new vineyards. By the time of the Bear Flag Revolt in Sonoma and the subsequent annexation of California by the United States in 1854, wine grapes were an established part of agriculture in the region. The vineyards of General Mariano Vallejo, military Governor of Mexican California and based in Sonoma, were producing an annual income of $20,000 at that time. The grape varietals planted would not be considered premium varietals today.

In 1855, a Hungarian named Agoston Haraszthy arrived and purchased the Salvador Vallejo vineyard in Sonoma Valley, renaming it Buena Vista. Commissioned in 1861 by the California legislature to study viticulture in Europe, he returned with more than 100,000 cuttings of premium grape varietals. Many of the immigrants to the area were Northern Italian or from other wine-growing regions of Europe. After the Civil War and before Prohibition, wineries such as Bundschu, Foppiano, Korbel, Simi, Gundlach, Quitzow and Sebastiani were established that still exist. 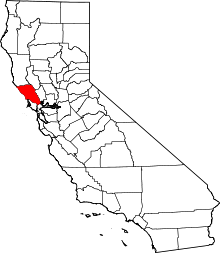 Sonoma County’s large number (13) of American Viticulture Area’s (AVA’s) reflect the wide variety of climate and soil conditions in the County, the large production in the County, and the prominence of Sonoma County in the wine market. The difference in climate and soil (terroir), means that cooler climate grapes grow well in certain regions and in others warm climate grapes are more suitable. The large production of the County means that each AVA is significant in its own right. The prominence of the California wine industry and Sonoma County in particular has established worldwide recognition of their wine regions. At the same time, many consumers have been confused by the many different AVA’s within Sonoma County. The growers voted in 2006 to form a Sonoma County Winegrape Commission, representing more than 1,800 growers. The Commission seeks to raise recognition for Sonoma County and encourages all wine from the County to bear the mark, “Sonoma County” on it.

The Alexander Valley AVA is one of the most densely planted of all of Sonoma County’s AVAs. Located along the Russian River, the boundary of this appellation extends north of Healdsburg up to Mendocino County north of Cloverdale. Viticulture has existed in the area since the 1850s but the wine industry has only fairly recently experienced success beginning in the 1960s with Simi Winery. Significant purchases of vineyard land by E & J Gallo Winery in 1988 and Kendall-Jackson in 1996 also raised the profile of the Alexander Valley. The profile of Alexander Valley wines has historically centered around the approachability and richness of the wines with Cabernet Sauvignon being noted for characteristic chocolate notes and warm mouthfeel. After Cabernet, Chardonnay is one of the leading varietal plantings followed by Sauvignon Blanc and Zinfandel.

The Bennett Valley AVA is one of Sonoma County’s newest AVAs and is a principal grape supplier to Kendall-Jackson. The AVA is surrounded to the south, east and west by the Sonoma Mountains and to the north by the city of Santa Rosa. The region receives a moderating effect on its climate from Pacific Ocean through the cool coastal fogs and breeze that creep into the area from the southwest through Crane Canyon between Sonoma Mountain and Taylor Mountain.

The Chalk Hill AVA is a sub-appellation of the Russian River Valley located near the town of Windsor along the foothills at the southern end of Alexander Valley and along the Santa Rosa plain. The name Chalk Hill comes from the unique volcanic soil of chalky white ash which has shown itself to perform well with planting of white wine varietals like Chardonnay and Sauvignon Blanc. The majority of the region’s wineries are located on the western slopes of the Mayacamas Mountains.

The view from Teldeschi Winery in the Dry Creek Valley AVA

The Dry Creek Valley AVA in the Russian River Valley centers around the Dry Creek, a tributary of the Russian River, and is approximately 16 miles (25.7 km) long and 2 miles (3.2 km) wide. The appellation is known particularly for its Sauvignon Blanc and Zinfandel production. Dry Creek Valley AVA is home to the majority of the Sonoma Gallo vineyards, who established winery facilities in the valley in the early 1990s.

The Knights Valley AVA occupies the boundaries between the southern end of the Alexander Valley AVA and the northern end of Napa Valley. Some of the earliest vineyards in the area was owned by Beringer Vineyards. The area is known for its Cabernet Sauvignon.

The Los Carneros AVA spans the last, low hills of the Mayacamas Mountains dividing both Napa and Sonoma Valleys just north of San Pablo Bay. The larger portion of the AVA stretches into Sonoma County with grapes grown here also being allowed to use the Sonoma Valley AVA designation. The area’s close proximity to the Bay has made it an ideal location for Pinot Noir and Chardonnay production with producers from international Champagne houses such as Moët et Chandon (Domaine Chandon California), Taittinger (Domaine Carneros), and Cava producers planting vineyards or sourcing grapes from the area.

The Northern Sonoma AVA is an all encompassing appellation that covers all of Sonoma County with the exception of the Sonoma Valley and some areas of the Petaluma River watershed. The AVA was proposed by E & J Gallo to accommodate wines made from a blend of grapes from scattered vineyards in Sonoma County.

The Rockpile AVA is situated at the northwest point of the Dry Creek Valley AVA, past Healdsburg. The area was first planted by Italian immigrants at the turn of the 20th century. Many of today’s vineyards were formerly occupied by a reservoir created by the Warm Springs Dam on the Russian River. The area is known for its fruity, ripe Zinfandels. 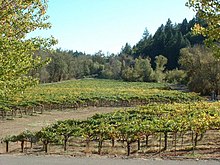 A vineyard in the Russian River Valley AVA

Russian River Valley AVA lies adjacent to and west of the city of Santa Rosa and incorporates the southern reach of the Russian River, where the river bends westward and cuts through the Coast Range to the Pacific Ocean. The AVA is characterized by the regular intrusion of cooling fog from the coast. The fog flows through the Petaluma Wind Gap and the channel cut by the river. The fog generally arrives in the evening or early morning and retreats before noon in the day. The appellation was granted AVA status in 1983 and accounts for about one-sixth of the total planted vineyard acreage in Sonoma County. In 2005 the AVA was expanded by 30,200 acres (122 km) to 126,600 by recognizing previously overlooked portions of the fog regions. Presently the Russian River AVA includes more than 15,000 acres (61 km) planted to wine grapes. At last count, 79 wineries were listed in the Russian River Valley Winegrowers website. The area is known for its success with cool climate varietals, notably Pinot Noir and Chardonnay.

Sonoma Coast AVA contains more than 500,000 acres (2,000 km), mostly along the coastline of the Pacific Ocean. It extends from San Pablo Bay to the border with Mendocino County. The appellation is known for its cool climate and high rainfall relative to other parts of Sonoma County.

Sonoma Valley AVA is known for its unique terroir with Sonoma Mountain protecting the area from the wet and cool influence of the nearby Pacific Ocean. The Sonoma Mountains to the west help protect the valley from excessive rainfall. The cool air that does affect the region comes northward from San Pablo Bay through the Carneros region and southward from the Santa Rosa plain. Sonoma Valley has played a significant role in the history of California wine.

Sonoma Mountain AVA, in the Sonoma Mountains, includes the town of Glen Ellen and is bordered on the west by the Sonoma Valley AVA. The area is known for the diverse micro-climates that occur within the crevices and folds of the hillside terrain and as such is home to production for a wide range of varietals including Cabernet Sauvignon, Chardonnay, Pinot Noir, Sauvignon Blanc, Semillon, and Zinfandel.[15]

The view of Sonoma Valley from Gloria Ferrer

A Proud Member Of The: